It has been a while since I sat and wrote, well, anything. Over the past few weeks, months and even the last year life has been a wee bit crazy. You might of noticed the world is going through a few things. Now, I've done Vlogs/talks on the YouTube (Here) as well as the positive messages on IG (Here). The truth is that it can be draining on the spirit, the soul and even one's outlook on life to show the "light" in all the darkness. I realized that if I sat to write a blog it would be about what is going on in the world and the words would pour out authentically but would leave me, basically, spent. So, I avoided writing and just watched the world as it spins into chaos. Chaos is a funny word when it comes to the world because truthfully, no matter what it is going through, these times are part of the human cycle of destruction and rebuilding. It is what we do as a species according to our own world history.

So here I am writing a blog again. I've rose from the depths, climbed onto the dock and made my way down the pier to express my truth for today's message. Even now, as I write, I look at the picture of me on the dock and I'm drawn back to the day I took it. I am actually surprised at the connection to this memory and the moment I experienced this morning that sparked the need to write tonight.

First I should explain this picture. 5 minutes before I snapped this picture I was at the other end of this dock taking pictures of the sunrise. I had woke up around 5 in the morning and couldn't go back to sleep so I took a drive to go sunrise hunting. I visited all my spots and wound up at this dock which I hadn't been on in a long time. As I happily shared the pictures with a friend I would learn something that would change life as I knew it. Life is interesting that way. I walked down the dock towards my car, I stopped and snapped this picture. Within an hour of this picture I would be shaking my money maker teaching my virtual dance fitness class. What my students didn't know, most of them anyway, was I was in deep thought during this class. It really is interesting how seeing an unrelated picture can be connected to a new thought. I can't say much more about this picture without giving away the point which should be left for the image that sparked this message in the first place. So, without further ado lets get to the here and now.

This morning (Aug 18, 2020 to be exact) I found myself, much like the picture above, unable to sleep. I drove around, again, to my normal spots and found myself standing on the Manchester boat dock looking at Seattle under the storm cloud illuminated by the rising sun. I stood there watching the boat pointing towards the city. I love this time of morning because my mind goes wherever it wants to go. I don't control the morning I just sit with it. On this morning my mind made a statement that I knew I would use for a message of some sort today. Fourteen hours after I took that shot I am sitting down to finally share it. Thoughts are funny that way they seem to come and go as they please. What was the statement my mind came up with you ask? Well, let me share: "The Scariest of the Knowns is the Unknown!"

I looked up as if I could actually see into my head and I, with my eyes a little perplexed, I said, "what?" And I said it out loud to myself. Why is the scariest of the known the unknown? More importantly, why the heck did this boat and Seattle spark the thought? The simple answer was the fear that comes with getting on that boat and heading to a place one has never been. The boat represented a choice and the city represented a change to come. As I thought about it more I realized that it is how many of us move through life and when we do that it has a way of stunting our development both physical and emotional. We are afraid of the unknown, the changes and the newness to the point we avoid, in this case, the boat all together.

So lets take it back to the first picture and what I was in deep thought about, not specifically mind you but in general. I thought how do you process a change in your life? Do you embrace it as a new challenge or condemn it like a toddler throwing a pile of broccoli from his plate to the floor. Do you grasp for everything you know about the situation, the person, the thing or whatever in hopes of "fixing" it? To be honest I think I went through a variation of all those things because, on some level, it is how we, usually, process changes/challenges. It's fascinating the process we, as people, tend to go through with change both good and bad.

The unknown is scary cause we have nothing to compare it to from our own bag of knowledge and history. But what if we had a comparison to do just that, compare. This picture here is from

the same spot as the one above. In fact if you look close at the bottom you can see the outline of the boat. I think to myself which one of these images would I be more likely to head to as an unknown? I think most people would say the day time shot. However, since I can't read your mind I'll share my response. When I look at the first picture I see a city that isn't alive. The storm has rolled in and there is no sign of life. In face, it looks ominous to me. While the journey to it is lit I don't find comfort in the idea of venturing to it. The night shot, on the other hand, the city looks alive and inviting. I want to head to the lights, hopefully better than Carol Anne did, to see the newness and the life that goes on there. This trip would be in the dark and that has it's own dangers and fears associated with it too.

See, there I can make a decision off an assumption from my history and knowledge. Most of us know from experience, or at least knowledge of a place, that a city is "open" during the day which means we can, in most cases, get more done. We also know more crime happens at night. Even with that knowledge the choice for me becomes easier because of what I have connected in my mind. That is what helps us and hinders us with the unknown, we try to figure it out before we even understand what is going on. we try to control it but learn, more often than not, we are unable to do that in anyway. It is the greatest thing we have that causes us the problems with the unknown. it is our minds that create the chaos. Lets do another comparison before I share what this line of thinking has brought me to.

Here is the same dock that I was on in the first picture. Would you be eager to walk into that unknown? For most of us we would probably say no. But why? Is it because its grey, wet and

gloomy? Or maybe its the stranger down the dock who could be either good or bad for us? Unlike the top picture this one doesn't have promise of brightness or success. Most of us look at the unknown like this image as if it was dark, wet, muggy and just not pleasant. The truth is we have no idea what the unknown will look like or what view is going to bear the most fruit as we move forward. The unknown is funny because it demands we fill in the blanks with assumptions based on limited information. And the crazy thing bout it is that we comply. So lets look at the dock pic further.

What if I told you I rather be at the second photo of this dock rather than the first? Even if I told you it was raining, wet, foggy, cold and just plain blah for weather conditions. If memory serves me correctly I didn't have a jacket on either. That being said, I'd still choose this one over the other one. Why? Because I know what you don't know which is the reason I stopped there in the first place and why I took the picture of the guy walking down the dock. The unknown in this case is, well, let me show you: 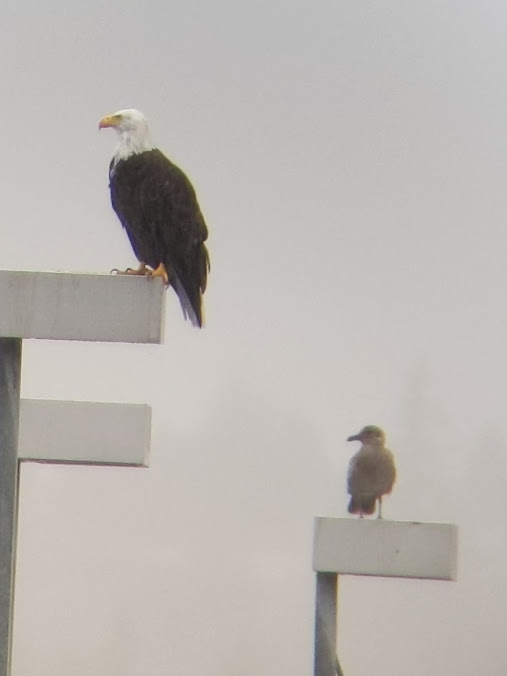 There was a bald eagle sitting on the light. I pulled over in the rain to see if I could capture a great shot of the bird. As I sat there getting soaked I happily snapped pic after pic and sent them to a few friends. The thing is, had I not told you there was an Eagle on the light you would of seen nothing more than a gloomy day. In one picture I am dealing with a possible life changing issue and in the other I am happily suffering the weather to capture one of my favorite birds. Does knowing that change your opinion? The more information we get then the unknown isn't so scary even if we don't fully comprehend it yet. Which brings me to the conclusion I came up with while out there near the dock.

The scariest "known" is when we "think" we know. The unknown is possibilities. It is what allows us to take a leap of faith. It is what allows us to get out of our comfort zones and explore new ones. When we think we know, like in the two comparison shots, we handcuff ourselves to the fear that comes with change. The thing is we don't know what the changes may be or how they

will or won't effect us. What we need to do is open our wings and take off like the Heron in this picture. We must believe that when we lean forward and fall towards the ground that our wings will lift us and we will fly. We owe it to ourselves to understand that the unknown is the opportunity to be challenged and to change, evolve for the better, grow emotionally and expand our knowledge base to ourselves and others. That is what we do with the unknown... we learn and make it, well, known. I'll leave with this thought and one last picture. Everything we do in life is about perspective and how we approach any of it. My brain wanted to call it scary but the truth is that it is scary because I won't have control over the changes and, well, the unknown next steps. Control is a fallacy, or better still, it is a rainbow as it can be as real as the computer I am typing on but get close enough and it will disappear because it wasn't really there in the first place. Not in the way we like to believe that is.

Embrace the unknown because you have no idea what you will be when you rise up again. And with that I bid you ado my friends. Thank you for joining me on my stream of consciousness I hope you got something out of the read.